Animals bridges, which may also be known as ecoducts or wildlife crossings, are structures that allow animals to safely cross human-made barriers like highways. A wildlife crossing is the broadest term and can include: underpass tunnels, viaducts, overpasses and bridges, amphibian tunnels, fish ladders, culvets and green roofs. [Source]

Wildlife crossings are a practice in habitat conservation, allowing connections or reconnections between habitats and combating habitat fragmentation. They also assist in avoiding collisions between vehicles and animals, which in addition to killing or injuring wildlife may cause injury to humans and property damage. It has been reported that vehicle-animals collisions costs the United States a staggering $8 Billion a year.

The first wildlife crossings were constructed in France during the 1950s. European countries including the Netherlands, Switzerland, Germany, and France have been using various crossing structures to reduce the conflict between wildlife and roads for several decades and use a variety of overpasses and underpasses to protect and reestablish wildlife such as: amphibians, badgers, ungulates, invertebrates, and other small mammals. [Source: Wikipedia]

The Humane Society of the United States reports that the more than 600 tunnels installed under major and minor roads in the Netherlands have helped to substantially increase population levels of the endangered European Badger. The longest “ecoduct” viaduct, near Crailo in the Netherlands, runs 800 meters and spans a highway, railway and golf course. [Source: Wikipedia]

Wildlife crossings are becoming increasingly common in Canada and the United States. Recognizable wildlife crossings are found in Banff National Park in Alberta, where vegetated overpasses provide safe passage over the Trans-Canada Highway for bears, moose, deer, wolves, elk, and many other species. The 24 wildlife crossings in Banff were constructed as part of a road improvement project in 1978. In the United States, thousands of wildlife crossings have been built in the past 30 years, including culverts, bridges, and overpasses. These have been used to protect Mountain Goats in Montana, Spotted Salamanders in Massachusetts, Bighorn Sheep in Colorado, Desert Tortoises in California, and endangered Florida Panthers in Florida. [Source: Wikipedia]

Talk about co existing. This is amazing and genius.

Heh; thought to post the first thing that came to my mind "animals using them?". I wonder the effectiveness of this towards the animals, and not the feel good sensation it brings. Hope it's a positive one. 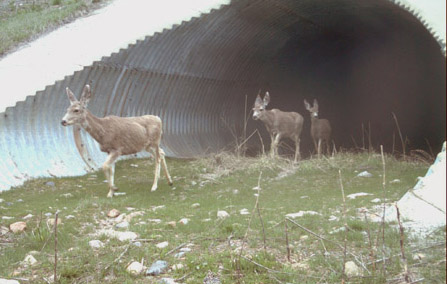 I wonder how affected this really is....
Anansi